Leonardo da Vinci isn’t just one of the greatest painters who ever lived; he’s singularly one of the greatest human beings who ever lived, too. It’s possible that nobody has ever mastered more fields of art, science, and theology within their own lifetime than the Italian master. Even listing them in this article would take us an age, but if you want to see his full list of achievements then spend some time on his Wikipedia page. The things he managed to do in the time he was on Earth are mind-blowing.

Although he was a scholar, a philosopher, and a scientist – and probably wouldn’t take kindly to being viewed as a simple painter – it’s his art that people know him for best. Even people who ‘don’t like art’ are familiar with the best-known works of da Vinci. They’re so popular, and so widely recognized, that they’ve even been used as the theme for a series of popular mobile slots which bear his name. Da Vinci Diamonds, Diamonds by da Vinci, and Double da Vinci Diamonds are all wildly popular with mobile slots players, who get to take in a little bit of high culture while spinning the reels. That’s not something you can say about most Renaissance artists. We’re not sure how the great man would feel about being a slots star, but we like to think he’d be flattered.

Because his work is in such high demand, it’s scattered across several locations. There’s no one definitive place you can travel to and see the best of da Vinci’s work, but let’s not see that as a bad thing. What better excuse could there be for taking a tour of beautiful cities around the world than seeing some of the greatest paintings ever committed to canvas – or, as the case may be, walls? If you want to know where the stars of the Da Vinci collection are, here’s our tour guide to the top five! 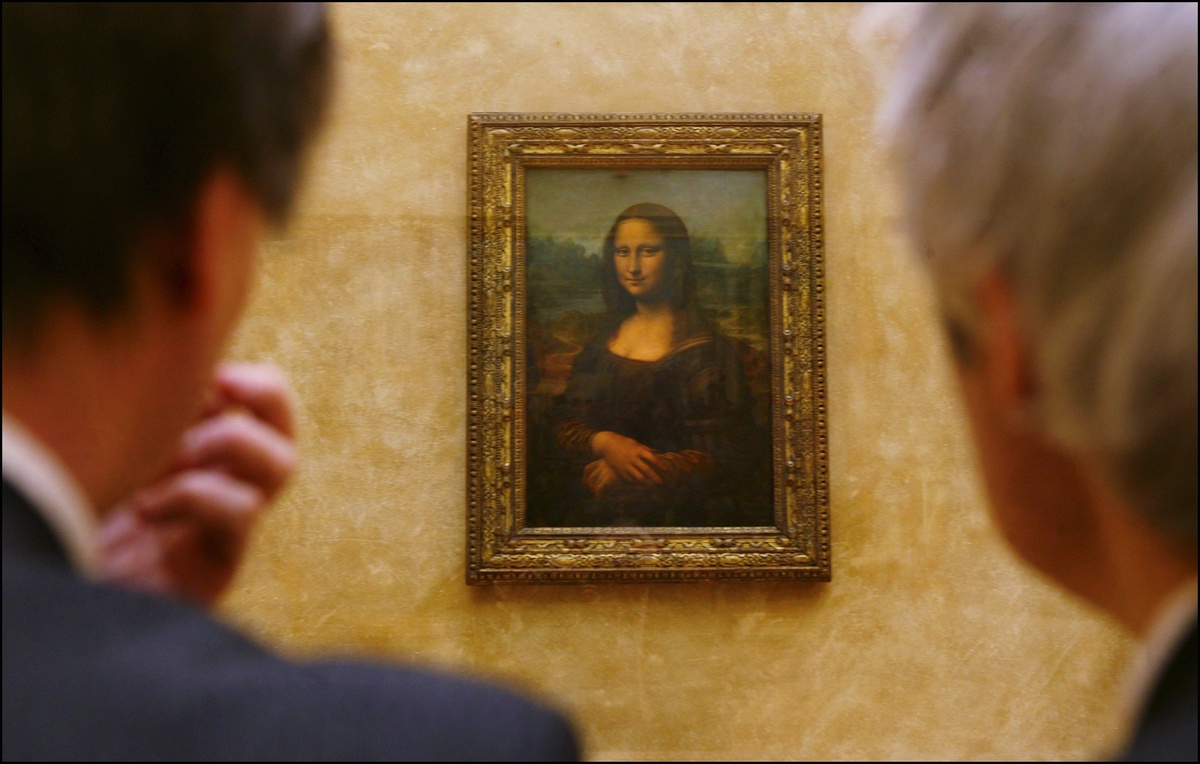 1. Mona Lisa – The Louvre, Paris
There are people who’ve never even heard of Leonardo da Vinci who know where to find the Mona Lisa, so you should already have known this – but you might not know the full story about the most famous painting in the world. It isn’t just the world’s favorite painting; it was also the artist’s. He started painting it at home in Italy, but couldn’t bear to part with it in 1517 when he moved to France, so he brought it with him and continued to add to it until the day he died. Interest in the painting is so strong that six million people visit it annually, and it till regularly appears in the news. Just recently, a prominent researcher claimed the painting is unfinished, and as such isn’t a complete work. The Louvre is one of the world’s finest art galleries – but it may be more well known for being the home of the painting than vice versa. 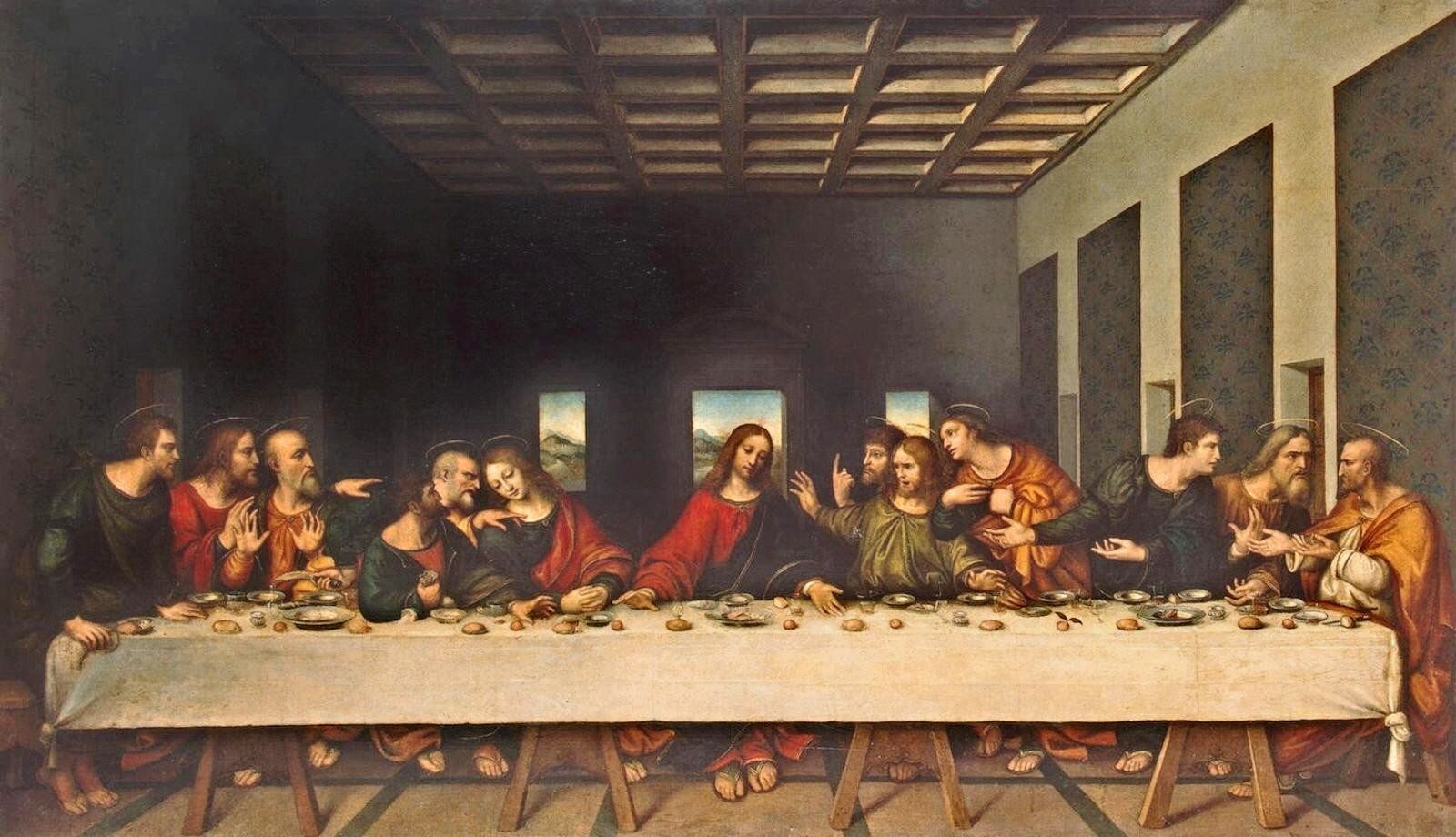 2. The Last Supper – Santa Maria Delle Grazie, Milan
Remember when we mentioned that Da Vinci sometimes painted on walls at the start of the article? This is why. The famous – and enormous – painting The Last Supper covers a whole wall in a church in Milan. Because of its location, visiting it is often a religious experience for some observers. You’ll have to book well in advance if you want to see it though; this isn’t something you can casually slot into a Milan city break. Because five hundred years of exposure to the air has weathered the mural somewhat, admissions are limited, and by appointment only. Anyone’s welcome to come so long as they’ve made a reservation. 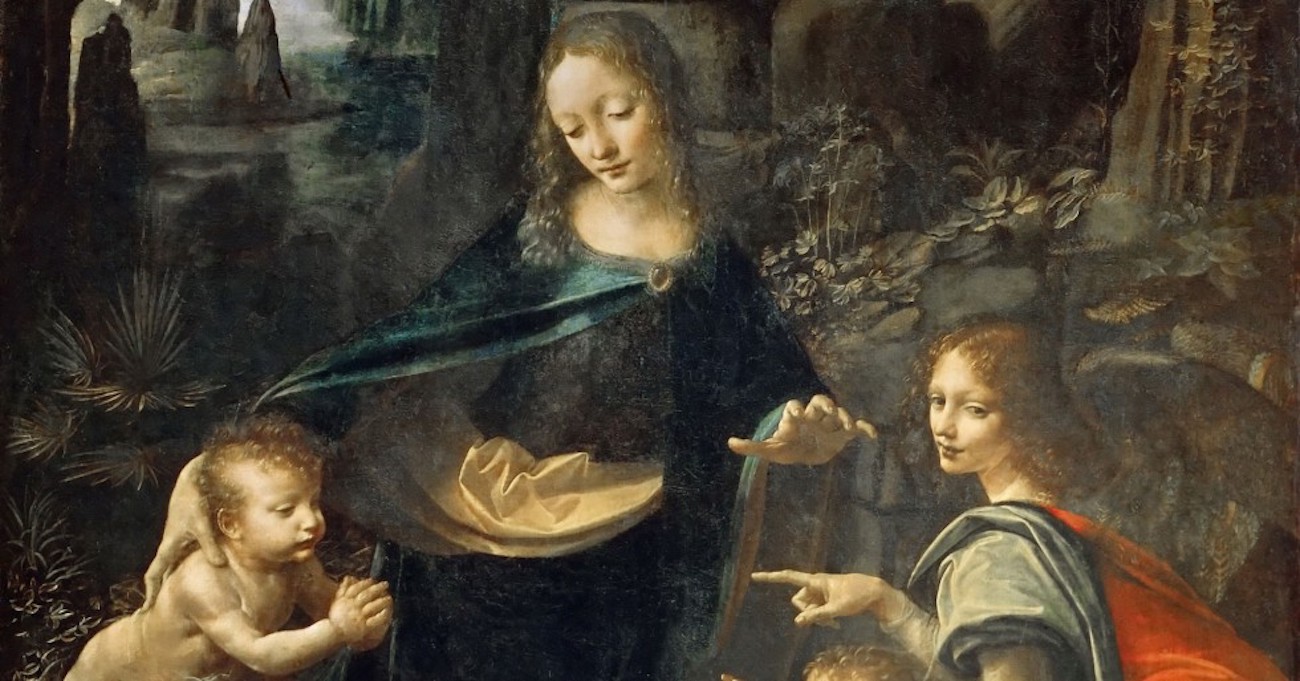 3. The Virgin On The Rocks – National Gallery, London
The Virgin On The Rocks – believed to depict Mary, mother of Christ with a halo – is one of da Vinci’s most recognizable works. Some have even noted a facial resemblance between the figure on this painting and the Mona Lisa, leading to speculation that he may have used the same muse. Incredible as it is, it might not be the most fascinating Da Vinci work that London’s National Gallery has to offer. That honor may well go to the Burlington House Cartoon, which is a series of chalk sketches on paper which collect together to form the outline of a larger painting. It looks like a rough design for something Da Vinci intended to commit to canvas, but a matching painting has ever been found. It could be a missing masterpiece! The best thing about the National Gallery in London is that admission is free. 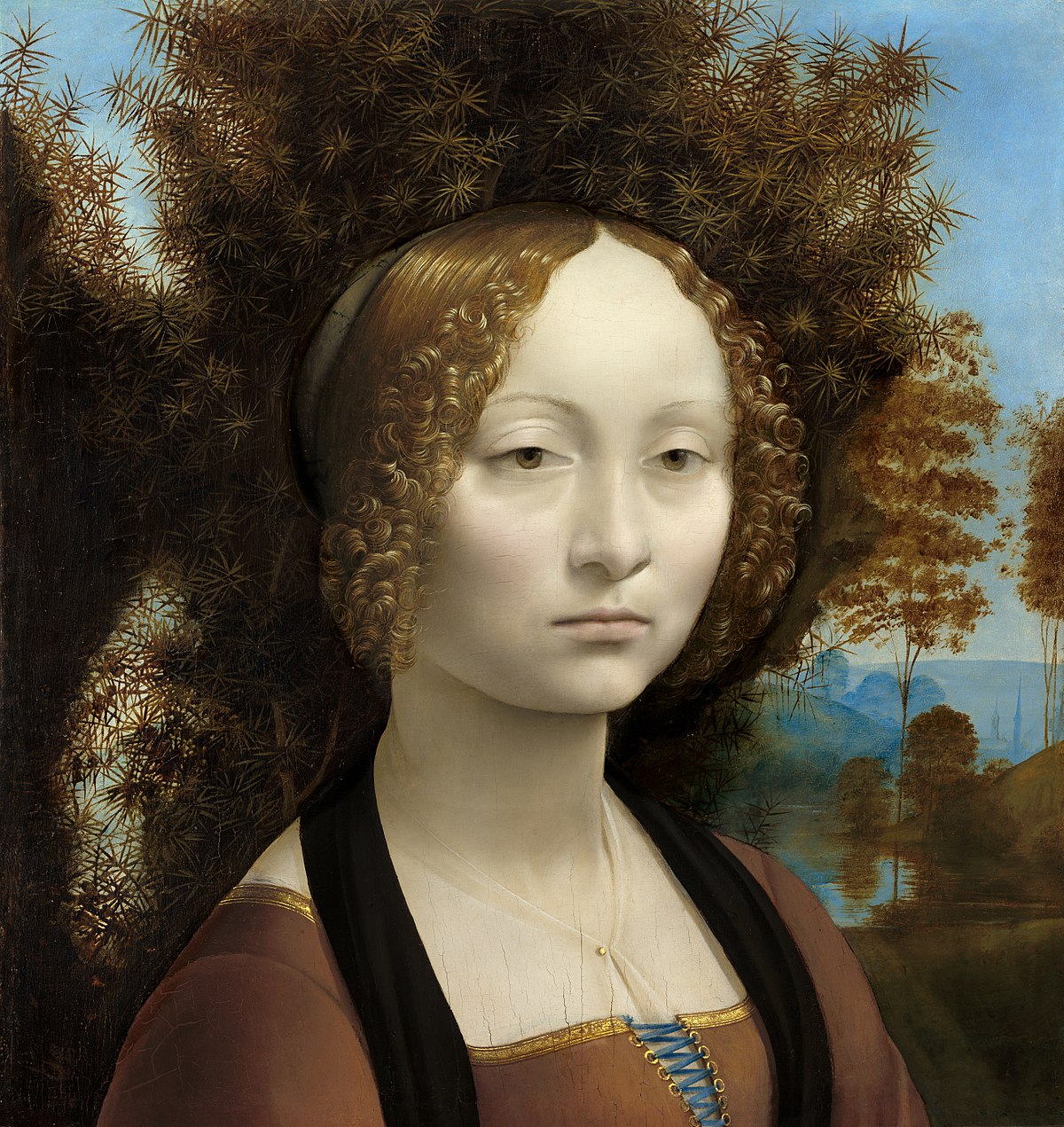 4. Ginevra de Benci – National Gallery of Art, Washington DC
We know that the majority of visitors to our site are from the USA, and so if you’d like to find a da Vinci without traveling too far, the National Gallery of Art in Washington DC is the only option you have. It contains the solitary work by Leonardo da Vinci in the whole USA. How fortunate that it’s a good one! The painting was probably a private commission, given that its subject is a wealthy aristocrat of Da Vinci’s era, but if he was paid for it he certainly ensured that the aristocrat got their money’s worth – it’s beautiful. It’s also historically significant; it’s believed to be one of the earliest of all of his oil paintings, and captures the artist at a time when he was experimenting with the format. 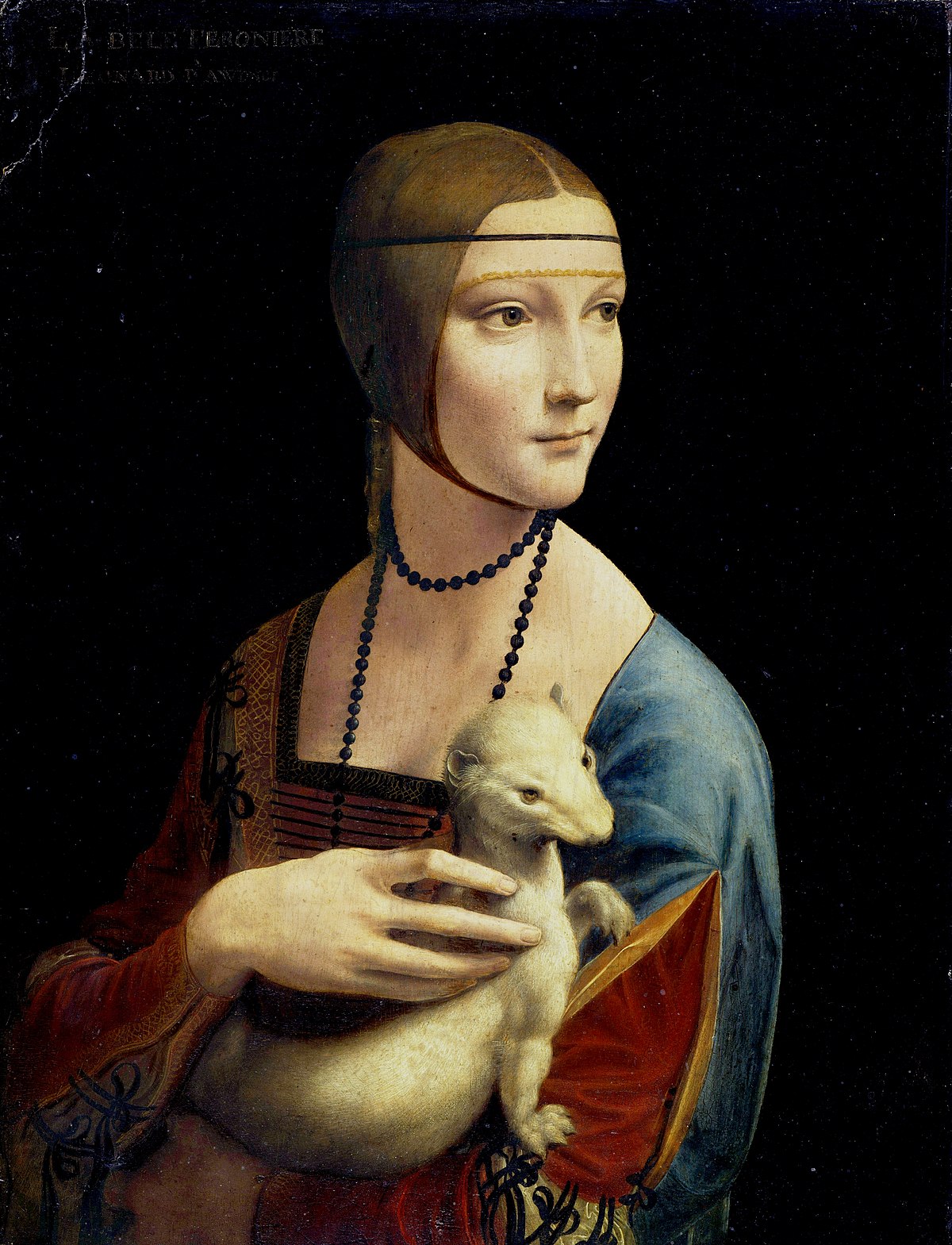 5. Lady With An Ermine – National Gallery, Krakow
Leonardo Da Vinci would almost certainly be upset if he saw how badly one of his most celebrated masterpieces has been treated over the years. This beautiful Lady once had a splendid blue background to accompany her, but a previous private owner decided to have it painted black at some point during the 1800s because they didn’t like the shade. They also had a veil covering the subject’s head retouched, so the color matched her hair. Apparently, vandalizing a then 300-year-old classic meant nothing to these people! Having endured all that, it was stolen by the Nazis during the second world war, before being recovered by American soldiers and returned to Krakow, where it had most recently been on display. Perhaps understandably given its mistreatment over the years, Krakow’s National Gallery now limits visitors to twenty at a time, and charges a special premium for an audience with the